I never really understood what this meant until I started getting rid of stuff.

Until I wanted to get rid of stuff. I can’t remember when this happened. Its like a light bulb went on and I realized I had too much stuff.

And then I wanted less stuff.

Less is my word for this week. 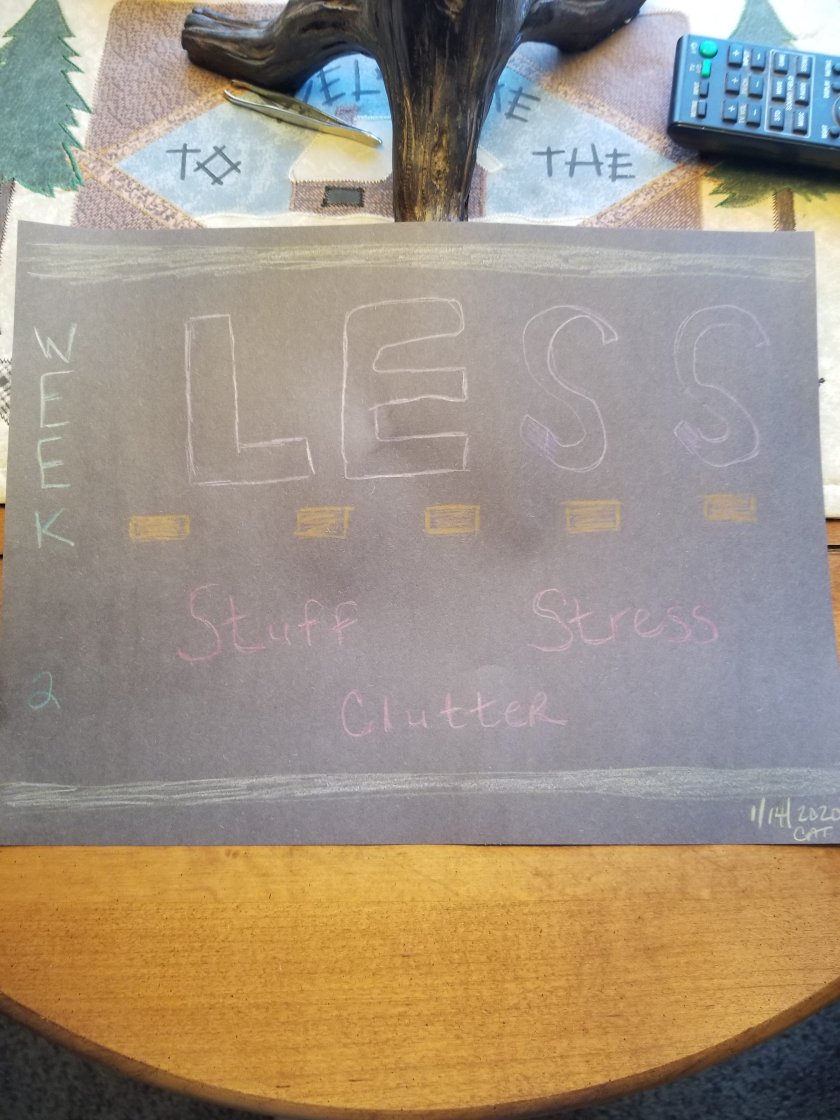 I know this isnt a very good picture. I have a lot to learn. I used metallic colored pencils which I love but they don’t photograph well. It didnt help that is wasn’t very sunny so I ended up taking the picture on my end table with the light on. I was in a hurry and didn’t look at the picture to make sure it was what I wanted.

I decided that I was going to post it any way because I am learning as I go. It might be a rocky road for awhile. It might not always be pretty but I am happy because I’m putting myself out there and exploring my creativity.

That is what I wanted.

I know less isn’t a word on my 54 word list. Why would it be? I normally wouldn’t consider less a positive word.

To me less means taking something away. Having less of something isnt really a good thing. Like having less money or food.

Until I realized having less stuff is good.

I do believe I have more time. I’m no longer looking for things because I they are stacked in piles throughout my house. I know where I put stuff. A place for everything and everything in its place. Ahhhh.

I definately feel I have more space. It’s amazing to look in a cabinet that is organized and I have everything I need at my finger tips. It makes me smile. I am so happy I took the time to do this. Its neat. Nothing is crammed into corners. Nothing is not used. Open space is good.

I have more freedom. I know this may sound weird but I do feel more freedom because I have more space I have the freedom to buy what I want to fit that space if I so choose. A better organizer or more product I found on sale or something that caught my fancy. I don’t have a bunch of stuff that I might use later taking up my space. Either I’m using it or I am not and if I’m not then it has to go. It feels good to have the freedom to buy what I want and need and have the perfect place to put it.

Honestly, I didnt want to let go of half of the things that I let go of. I had a lot invested in that stuff. Time. Money. Energy. But I am glad I did. It was a good decision. I feel better. I’m stronger. My mind is clearer. It cleared a path for me and showed me parts of myself that was buried under all of that stuff.

Less is definately a positive word.

You Are A Badass by Jen Sincero

The Artist’s Way by Julia Cameron